The other side of Sherwood Guernsey 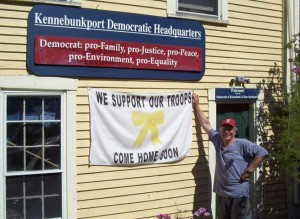 Sherwood Guernsey works hard for his clients . . . and fishes hard for the perfect rainbow! An avid fly fisherman for many years, he has sought the perfect trout in streams at home and around the country, but his special places are found in the Rocky Mountains. Each summer, he travels west and spends a couple weeks hiking the streams of Wyoming, Montana, Idaho and Alberta Canada. “I have fished from Jackson Hole, Wyoming to Jasper, Alberta Canada,” says Guernsey, “and the sheer beauty of the mountains is only exceeded by the thrill of  the tug of a rainbow or cutthroat trout, gulping a miniature dry fly on the end of my line.” For anyone interested,” he added, “please give me a call, and I’ll be glad to tell you a few rocky mountain fishin’ tips.”

To the dismay of his clients who are Yankee fans, Sherwood is a “die hard” Red Sox fan, and a member of the “Red Sox nation.” “Baseball is sooooo traditionally American,” he emphasizes, “and the Red Sox embody the best of it all grit, courage and determination, true American values. Despite being down year after year, just think about the way they continued to keep fighting to win; and then in 2004, against all the odds, the incredible, unbelievable come back of all time to win the American League championship and then the World Series. It’s that kind of spirit and determination that makes them the world’s best sports team, and one of the best examples of “never giving up”.

Community service, and supporting and protecting our democracy mean we all have to be informed, involved citizens. Sherwood has epitomized this belief by running for elective office in the 1980’s, and serving in the state Legislature for four terms; he then continued his political involvement by supporting local, state and national candidates, culminating in the creation of Berkshire Brigades, the County Democratic organization, of which he was chairman until September of 2007. His work in politics has always focused on grass roots organizing and issues education.

The fact is, pure and simple, that there is nothing more important in life than family. Sherwood has been married to Carol Guernsey of Chappaqua, New York for over 40 years. They have three wonderful children: Margo Guernsey, working to produce documentary films, married to a computer programmer born in the Dominican Republic, now a citizen, and both living in Miami Florida; Katie Guernsey studying to be a social worker, married to a veterinarian and living in upstate New York; and Matthew Guernsey, a mechanical engineer living and working in Boston. They are blessed with having 4 grandchildren.